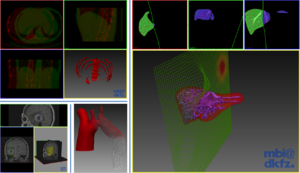 This is the 2014.10 release of the MITK release cycle. The complete list of new features, bug fixes and known issues is down on this page.

Binary installers for Windows, Mac OS X and Linux are provided, which contain the MITK Workbench application. In addition to image loading/saving and level windowing, the following plugins are included:

The following plugins have been newly added in this version:

Optimize and resample your surface meshes

VOI selection based on various shapes

Create videos of your data using timeline based animations

Please note that the installers do not contain the source code or header files for the precompiled libraries. To develop applications or plugins with MITK please get the source code.

How to get it?

The following modules were newly added or factored out from existing modules:

The 3D interpolation has been improved in many areas:

The following toolkits were updated:

The following third-party toolkits were added to the MITK superbuild:

The documentation contains a detailed list of deprecated functionality. Please find a summary below:

In the 8 months since the last release more than 400 bugs were fixed.

Not everything could be fixed in time, so here are the most important known issues